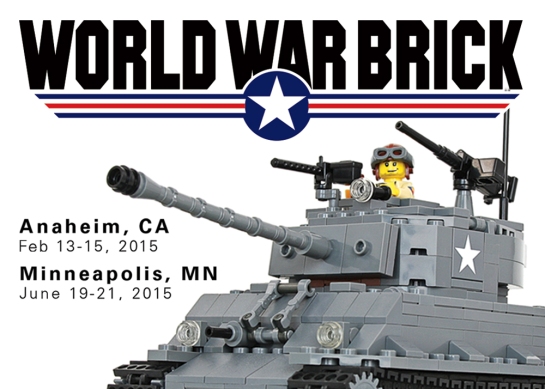 We are pleased to announce that there will be no less than two World War Brick events in 2015:

We will be hosting our first-ever West Coast event at the Embassy Suites Anaheim South. It will follow the same format as our other World War Brick events: Activities for Weekend Pass holders will happen all day Friday through Sunday, with a six-hour public window on Saturday and Sunday only. Weekend Passes will cost $75 and single-day Public Tickets are $10. Of course we will offer a discount spread for people who buy their passes early. For your convenience, we are encouraging guests to stay at the Embassy Suites a have secured a discounted room rate if you book HERE.

As part of our preparations for World War Brick Anaheim, the Brickmania team will be driving from Minnesota to California with several of our large displays. We will make stops in four cities on each direction of our trip and set up one-day-only displays to help offset our travel costs.

At Brickmania Toyworks, which is a gallery space located in a former WW2-era armaments factory in Northeast Minneapolis and is currently the world headquarters of Brickmania Custom Kits. Weekend Passes will cost $75 and single-day Public Tickets are $10. Of course we will offer a discount spread for people who buy their passes early.

Did you attend WWB 2014? If so we’d like your feedback to help make the next events better. Please follow THIS LINK to complete the survey.